Jim Campbell is a contemporary light artist who has been working with various forms of light art for thirty years. His most recent works feature lots of ultra-low-resolution imagery, such as what we saw in class on the FadeCandy board. On these screens, the details of images are impossible to discern, and we are forced to rely on form and motion to understand what is happening. 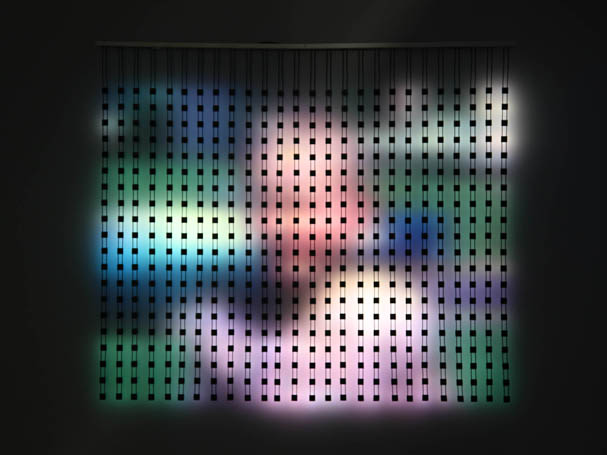 In the past, he has worked with other forms of light art, often incorporating projectors and live video feeds. While he rarely tells the viewer about any intended meaning in his work, it is clear that he is especially interested in how we perceive things. Light is an excellent medium for this, as, in his words, it “has an almost meditative quality.” 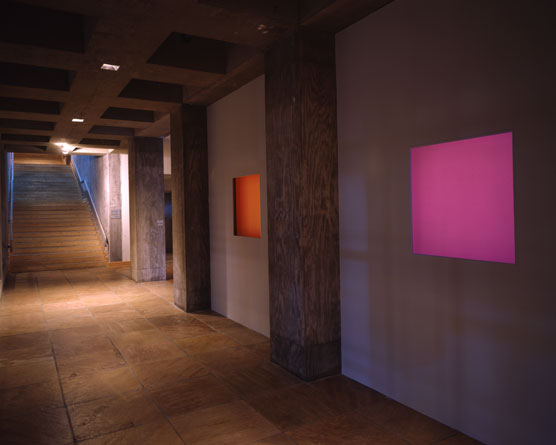 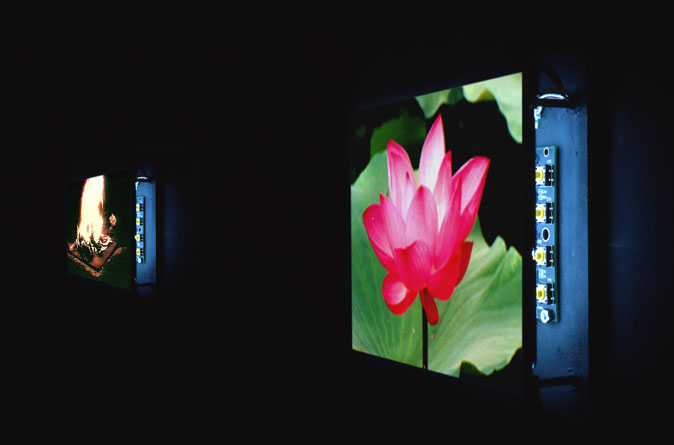 In Color by Number, a still images is shown on one side of the room, with a solid-color display on the other. A white pixel scans across the still image, obscuring a single pixel of the image. The color of this pixel is shown on the solid-color display. This causes the entire image to eventually be presented to the viewer, but in a format that we don’t really perceive as an image.

Last day in the beginning of march 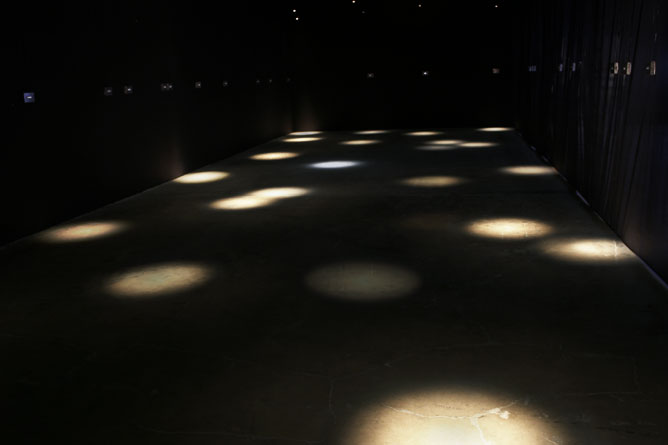 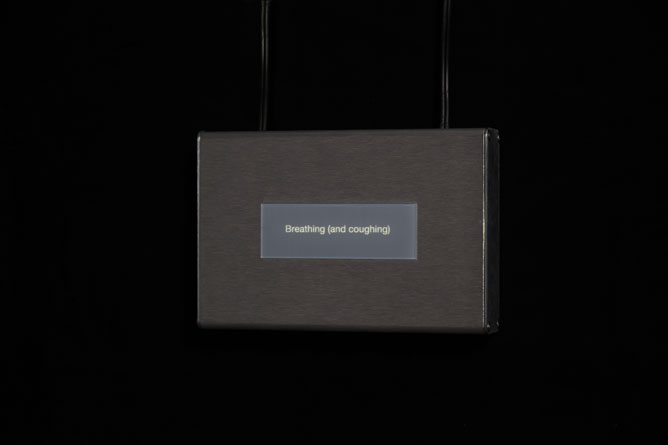 This piece is something of a rarity, in that is has much more stated meaning than much of his other work. It is essentially a memorial to the last day of his brother’s life. Each light represents a specific memory from that day, and corresponds to a short sentence that is shown on the screen when a viewer stands in that light. These sentences correspond to memories from that day, and include an audio track that plays and controls the blinking of the lights. 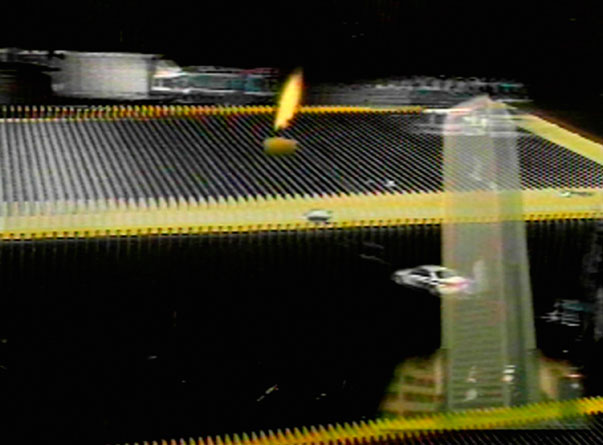 This piece involves several video cameras near the installation, which all display feeds on the same monitor. Their footage is combined so that the viewer sees the present time from several different perspectives. 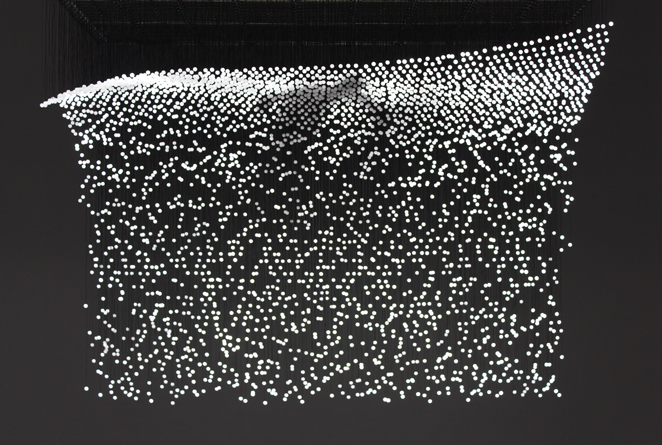 This low-resolution piece consists of a large number of LEDs in the shape of an ocean wave. The LEDs are used as pixels to show a low-resolution video of swimmers captured from the bottom of a pool. The shadows formed by the swimmers in the video translate to darker LEDs, in turn causing them to create something we perceive as a shadow in the art piece. 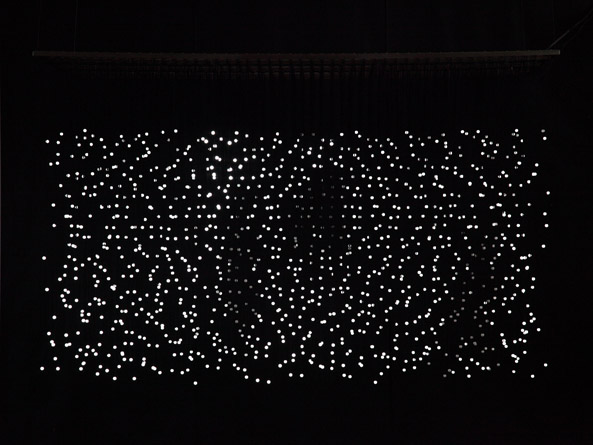 While this piece may appear to be very similar to the previous one, it has one key difference: it is 3D. The LEDs in this piece are hung in a 3D box rather than a rectangle, but still show a 2D image. This image is visible when seen from a single side, but becomes more distorted as the viewing angle changes. However, it is not meant to just be viewed from this one angle. The distortion of the image is a fully intentional part of the experience. 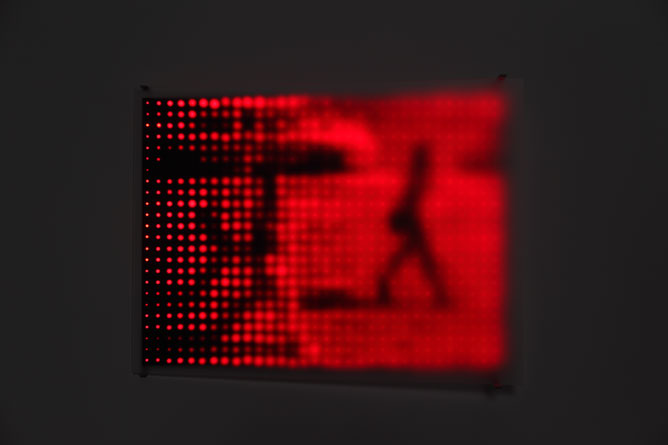 This piece consists of video footage of people walking on a street drawn using a red LED matrix. Like the previous two pieces, the LEDs form an ultra-low-resolution screen on which to view the footage. However, this piece also has a sheet of glass that is tilted and mounted over the front. On the left side, the glass is very near the LEDs and doesn’t change the image much, so the individual points of light are easily perceptible, and the image looks very digital and high-tech. On the right, the glass is further from the image, and blurs the light. Even though the underlying LEDs are the same on this side, the image is perceived as more analog and low-tech.